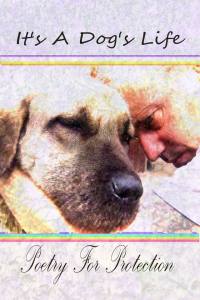 Available to purchase from Amazon

It’s A Dog’s Life: Poetry For Protection With each copy sold, 100% of the royalty goes directly to a small animal sanctuary in Bulgaria which takes in, treats and eventually re-homes as many abandoned, abused and neglected animals as possible.
With a real street dog problem in Eastern Europe, and no effective schemes to protect future generations of dogs from the same fate, individuals are called upon by their own hearts to find a place in their lives for helping these helpless beings. With poetry donated from across the globe, each contributing author has decided they want to support the efforts of these amazing people. By using their own talent, over thirty international poets have collaborated to create this marvelous book. Ideal for lovers of animals and of poetry anywhere, this book guarantees a little extra help for those who need it most.
Packed with heartfelt and emotional poetry, photography of the animals themselves and an introduction by compiling editor Rowan Blair Colver, A It’s A Dog’s Life is a great choice. For animals in need, for awareness, for peace and, of course, for poetry. Featuring poetry from poets all over the world, including: Valentina Vale Karen Harding Rhumour Tina Jordan Dennis Mark Catherine Morton Kristina Blasen Molly Shores Karen Lyons Kalmenson Dennis Moriarty Donna Jones Carol Ann Dondero Jana Ducret Rod and Maureen Sudlow Elizabeth E. Castillo Lisa Koutsonas Logan Keys Sean Lee Laura Verdi Stidiron Richard Horn Amelia Modrak Philip Matogo Susan Richardson Howie Good Robert Dawson Michele Lomas Shirley Crosby Kirk Nordstrom Nikki Attree Adam Lindley Victor Snowden Rowan Blair Colver
———————————————————————————————————————————————–
Amazon Review 5.0 out of 5 stars Great Collection of modern poetry
By Dave Dunn
Here we have a great example of the power of modern poetry to excite and inspire, with that extra power of rhythm, imagery and rhyme.By buying this book you are not only gaining a collection of work from the many poets around the globe who contributed their poems freely, you are also providing much needed funds for a dog rescue shelter in Bulgaria which receives all of the profits from every book sold.Many of the poets included have other published works you may wish to search for here or with your favourite search engine.
——————————————————————————————————————————————

Towards the end of 2013 and at the beginning of 2014, Rowan made a global plea for poetry donations and after recieving dozens of poems, compiled It’s A Dog’s Life: Poetry for Protection which gives it’s entire royalty payment to a small animal rescue sanctuary in Bulgaria. During 2014 Rowan released a new poetry anthology of his own poetry written from the previous year called Integrity of Spirit.

Rowan developed a passion for music as well as creative writing in the 90’s, and began to learn the guitar. By 1998 he had begun to play in bands, the first being Only Born Yesterday, followed by Durban Poison. Eventually success came with the group Fickle, a folk 3 piece in which Rowan played guitar and sang backing vocals. He became o prolific song writer in this period and developed a love for the folk acoustic sound. A few large scale gigs ensued, including a support slot for the internationally recognised Oyster Band. During this time, Rowan began to make music under the name MirrorFace and recorded his first studio album “Beyond The Dream” with Tarana Records. This CD is currently unavailable but not lost.

1999 was the year that Rowan moved into the infamous Park Hill estate in Sheffield. He lived here for many years, and worked several jobs, including at Brammal Lane, home of Sheffield United FC, Oxfam and for the Park Ranger Service. In 2004, Rowan parted ways with Fickle due to other commitments, became a father and begun studying Natural Science with Honours in Physics at The Open University. Despite his daughter being born with Cri Du Chat Syndrome, learning to handle the extra responsibilities that go with it, and working regularly, he managed to continue producing music under the MirrorFace name.

During the ’00s, Rowan began recording music for himself under the MirrorFace name, and also began to create electronica, under the name of Experiment A. He eventually released three electro albums and one MirrorFace album. They were called, Experiment A and The Rainbow Dawn, Fare Well Traveller, Lightspeed Revelas Hidden Entities Bearing Blue Gifts, and MirrorFace – Total Internal Reflection. During this time, Rowan also began to write Harmonium Alesta and the now acclaimed A Poet, on Park Hill? which revieced media attnetion in the form of a newspaper article and a BBC Radio 4 documentary,

2010 saw the birth of his son and second child, also the release of his first selcetion of books and the CD albums. He had become recognised by now internationally as a talented poet and had already won awards and had a substantial following. This encouraged more poetry anthologies to follow, and a couple of stand alone books, The Angel of Aevalore and Pretty Poems, Meditations and Affirmations. Also, he began Sinister Mystica, part 2 of the Trident of The Eternal Child. This was the year Rowan also became Reiki Attuned.

In 2012, Rowan released two self titled albums called Haunting Thee and Beyond The Frozen Ocean. The later recieved much attention and has proven to be popular. This was the year he was filmed for a Richard Hawley music video on Park Hill estate, and also when he released Sinister Mystica and re-released Harmonium Alesta. 2013 was the year he moved away from Park Hill and began living in the suburbs and began his own music and creative arts label, Alternative Fruit Creative Arts. He was approached by a drama company from London to provide inspiration and his own life stories for a play being written about life on the Park Hill estate.

During 2013 Rowan also began working as a music journalist for local paper publication Now Then Magazine and began his official blog, Welcome Fellow Wanderer. Deciding to combine all poetry books written while living on Park Hill, after leaving the estate, Rowan released Echoes of a Concrete Cocoon, which replaces the first 3 anthologies and the Angel of Aevalore as individual books.